To Say Goodbye with Love 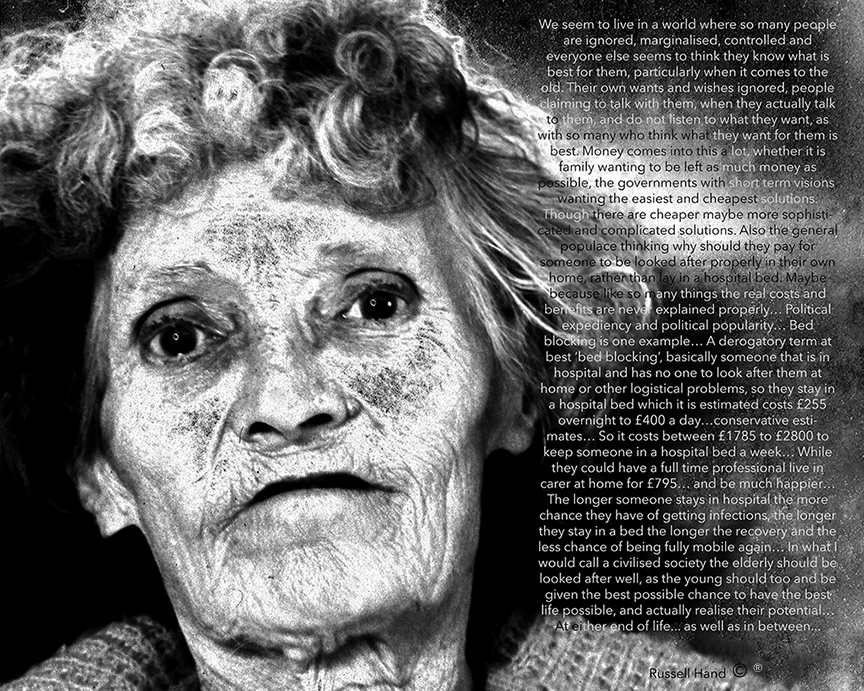 'We seem to live in a world where so many people are ignored, marginalised, controlled and everyone else seems to think they know what is best for them, particularly when it comes to the old. Their own wants and wishes ignored, people claiming to talk with them, when they actually talk to them, and do not listen to what they want, as with so many who think what they want for them is best. Money comes into this a lot, whether it is family wanting to be left as much money as possible, the governments with short term visions, wanting the easiest and cheapest solutions. Though there are cheaper maybe more sophisticated and complicated solutions. Also the general populace thinking why should they pay for someone to be looked after properly in their own home, rather than lay in a hospital bed. Maybe because like so many things the real costs and benefits are never explained properly… Political expediency and political popularity… Bed blocking is one example… A derogatory term at best ‘bed blocking’, basically someone that is in hospital and has no one to look after them at home or other logistical problems, so they stay in a hospital bed which it is estimated costs £255 overnight to £400 a day…conservative estimates… So it costs between £1785 to £2800 to keep someone in a hospital bed a week… While they could have a full time professional live in carer at home for £795… and be much happier… The longer someone stays in hospital the more chance they have of getting infections, the longer they stay in a bed the longer the recovery and the less chance of being fully mobile again… In what I would call a civilised society the elderly should be looked after well, as the young should too and be given the best possible chance to have the best life possible, and actually realise their potential… At either end of life... as well as in between...'

This image text piece was produced by myself along with another piece by me, a sculpture, for an exhibition organised and in aid of https://www.endbedblocking.org

Back to image text menu