Bed of Barbed Wire and Chains 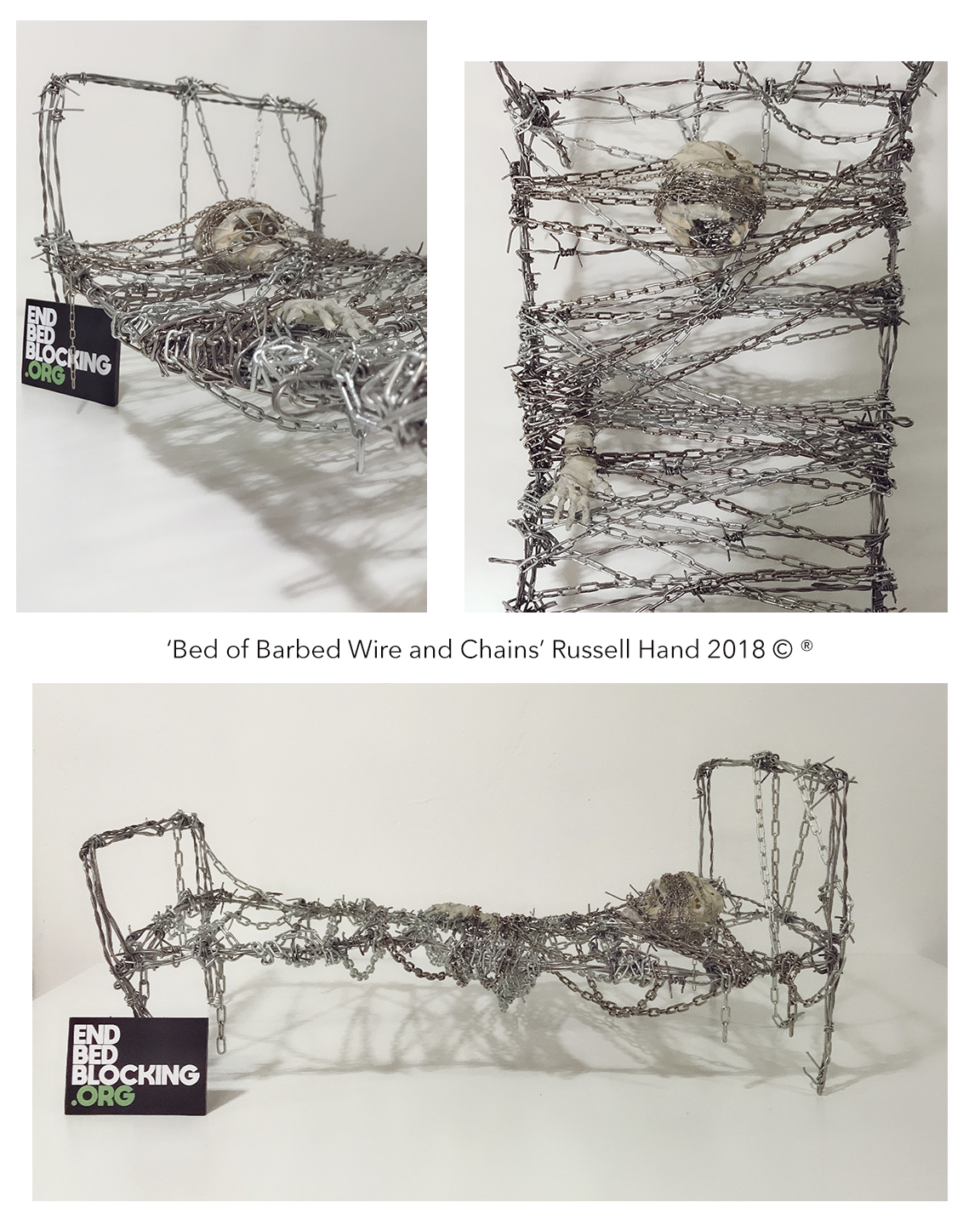 This sculpture / piece was produced by myself along with another piece by me, an image and text one, for an exhibition organised and in aid of https://www.endbedblocking.org

After the show / exhibition opening when several of us went down the pub afterwards, I was asked "Why only a head and arm..." I replied "disappearance"

'As she lay there feeling the barbs in the bed gradually lengthen and the chains gradually wrapping around her body, she still remembered the day she was admitted to the ward and that feeling that she would be cured and sent home to continue the life she had, surrounded by all her past and things she knew in her own home. But these memories and hope of leaving were beginning to fade, her body and skin were feeling more fragile and delicate each day as she lay there, and a metamorphosis, similar to a play she once saw by Kafka, called The Metamorphosis seemed to be taking place, though unlike Kafka’s plays beginning and Gregor’s plight, "As Gregor Samsa awoke one morning from uneasy dreams, he found himself transformed in his bed into a gigantic insect-like creature.” She found that as well as getting more fragile, her bed seemed to be absorbing her, or to put it another way, her and her bed were metamorphosing into a new form that were elements of both. It had changed from a comfortable resting place into something of pain and sorrow, and all sense of hope or escape were gradually being lost. She seemed to be becoming more invisible to the staff and even the occasional visitors she had, who seemed to talk at her and not really expect any response. A gradual fading, where she began to wonder if the transmutation once complete, there would be nothing left that anyone could see but the bed. In which case she wondered would they put someone else in it, because she had totally disappeared from anyones perception. That is when she was lucid, which like the deteriorating state of her medical health also seemed to be effecting her cognitive abilities, as she was trapped within the bed with no intellectual stimulation to keep her mind functioning. It also almost seemed like another play she knew or a variation on it, ’No Exit’ by Jean-Paul Sartre… the comfort and hope she had first experienced when arriving at hospital had turned into some kind of hell. She contemplated her own disappearance as she lay there, and could almost see parts of her body fade and disappear from existence’. Russell Hand 2018 © ®

Bed of Barbed Wire and Chains

Back to sculpture menu